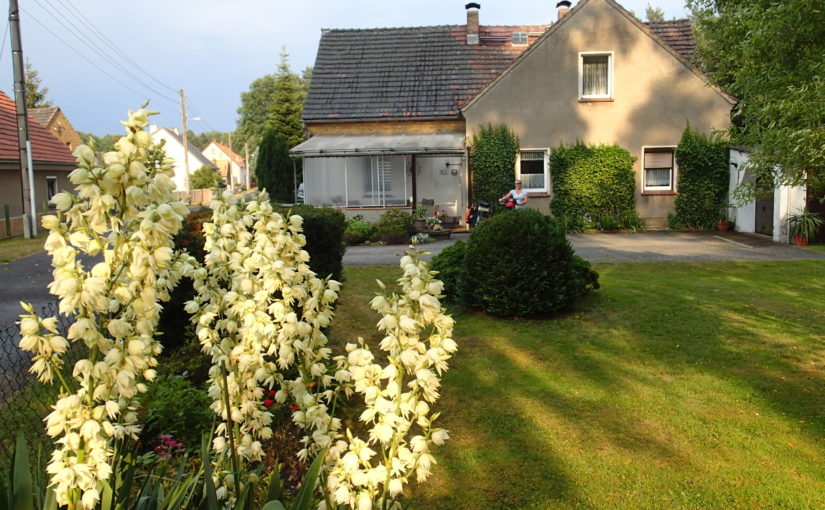 The Holiday Apartment Junge is located in the peaceful village of Krauschwitz, south of Bad Muskau, which is known for the “Prince-Pückler-Park”. Krauschwitz is a collection of country cottages, mainly from GDR times, with a meadow, an orchard, as well as a spruce forest framed, picturesque playground and football field. The village consists of the small road called “Im Tale”, running just above the Oder-Neisse cycle path. The Fürst-Pückler-Park and Bad Muskau can be easily and safely reached by bike, joining this bike path “D-Route 12” through the woods at the southern end of “Im Tale”; as well as the Polish city of Łęknica, via the former railway bridge crossing the river Neisse on the historic Bad Muskau – Weißwasser railway line.

The farm workers cottages on “Im Tale” in Krauschwitz are now all renovated and because the village is so homey, often very nicely done. So were these two apartments, which are actually one cottage, with one kitchen, one bathroom, a sheltered porch, a garden and a shed (for parking the bikes). Either you rent the larger part or, like us, the part with the smaller sleeping and living area. If you come with family, rent both parts together and you’ll have plenty of space.

While there are many charming details from GDR times on the outside, the inside, the bathroom and the kitchen are modern and tastefully decorated. The friendly family Junge lives in a larger house on the eastern side of the street.

We were here for just under a week, to explore the UNESCO listed German-Polish World Heritage centre Fürst-Pückler-Park and surrounding area by bike. We would have lived to stay longer, had we not planned to continue the cycle route along the Neisse to the Czech Republic. For a visit to Park Bad Muskau / Park Mużakowski and surroundings, this pearl in Krauschwitz is highly recommended.